“Indonesia Emas 2045” is a slogan that is continually heralded by the president and his staff, echoing the hope to be in the top 4 most economically stable countries. This hope is based on Indonesia’s demographic conditions in 2045, in which 70% of Indonesia’s population will be within the productive age (15-64 years old). This means that Indonesia will be populated predominantly by young people; in other words, the key to economical stability depends on the younger generation. Thus, Indonesia Emas 2045 should also be the aim of educational institutions in their role of producing excellent human resources (HR).

For this reason, Universitas Pelita Harapan (UPH) prepares its students, exposing the current situation and issues that deserve attention through its learning process by inviting government officials, professionals, and practitioners to share their experiences in their fields to students. Hence, UPH Business School invited the Indonesian Ambassador for Singapore, I Gede Ngurah Swajaya, to give a public lecture to 800 Business School students, on February 7, 2020, at the Grand Chapel UPH, Lippo Village Campus. The public lecture entitled “Toward Indonesia Golden 2045” was attended by students, especially those in the International Business concentration.

Ambassador Ngurah explained various global issues such as coronavirus, US-China war, radicalism, geo-political & socio-economic disruption, as well as problems on a national scale that have occurred, and invited students to find solutions.

He explained the cooperation in investment and human resource development between Indonesia and Singapore. It is shown by the fact that Singapore has always been the number 1 investor in Indonesia. Meanwhile, in the HR sector, the two countries agreed to collaborate in education. Ambassador Ngurah reminded the importance of Indonesia preparing human resources through education, namely PAUD (Early Childhood Education) to higher education.

“Students are frontliners – economic actors who can transform Indonesia. Reflecting on Singapore, discipline is one of the keys to success. Discipline makes you more productive. Then do the following steps: Be your own, start anywhere and be confident. After that, take your plans seriously and keep in mind what you want to achieve. Then understand that your contribution is limitless, just do what you can with confidence. Don’t feel inferior, but don’t get overconfident as well,” said Ambassador Ngurah.

Responding to this guest lecture, Cynthia Anna Wijayanti, the head of lecturer in UPH International Business Concentration and the moderator, stated that such topic was very suitable for the attendants.

“International Business (IB) is one of the concentrations of the Management study program which has specific courses, one of which is Current Issue in International Business. This is in line with what was explained by Ambassador Ngurah, that is, the current global challenges and national challenges faced by Indonesia as one of the major countries in the world in terms of natural resources, economic growth, and human resources. However, students outside the IB concentration can also continue to study International Business as a basis for knowing the dynamics of change that occur and its impact on Indonesia and the cooperation between countries, both bilateral and multilateral. So, the topic brought by Ambassador Ngurah was on point. He motivated and gave insight to students so that they were more exposed to the global world and could become agents of change towards the golden age of Indonesia in 2045,” explained Cyntia. (mt) 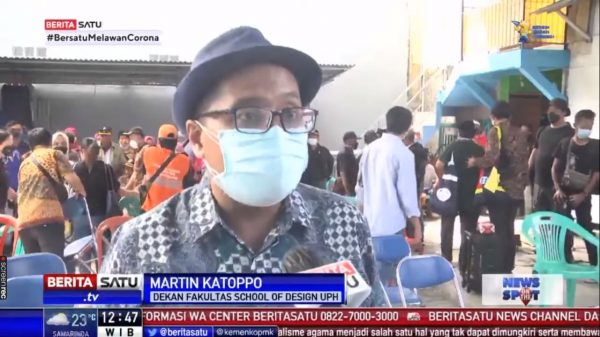